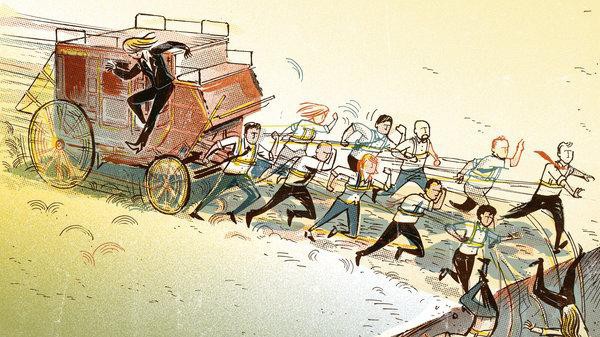 The disaster once again proved the classic principle of Warren Buffet: “Employees who only know sales will sometimes be tempted by sales”.

Background: Wells Fargo is a rare “calm” name operating during the economic crisis of 2007-2008 thanks to its safe strategy, cross-selling efficiency and management’s foresight.

The Plan: Cross-selling becomes the focus of post-crisis development, Wells Fargo employees must open 8 to 20 accounts a day if they don’t want to be fired.

Results: Unable to bear the pressure, these employees created more than 3.5 million fake accounts, causing the whole company to be in serious scandals.

Throughout the 2007-2008 global financial crisis, Wells Fargo became a shining example amid a series of scandals and bad results of other competitors in the market.

Wells Fargo is also evaluated as a responsible company by experts when always “dodging” risky loans, creating a solid reputation on Wall Street in particular and the financial world in general.

Part of that success is due to the ingenious cross-selling of Wells Fargo employees, customers are always offered a variety of products to increase their loyalty and, moreover, the sales for the company. organization.

In 2013, hiring professionals across the United States noticed a new wave of job hunting from Wells Fargo employees.

On the internal forums, employers almost have the same feeling, Wells Fargo employees are not only interviewing to seek new opportunities but seemingly begging the new company to “save” them from an environment. toxic work.

Some of the honest statements from candidates confirmed by many recruiting staff include:

“We were forced to do the part of 2 or 3 people at the same time because too many employees quit. But we were not allowed to work overtime, our quota also skyrocketed every day.”

“The manager spends most of his time competing with other groups. We are not allowed to cooperate with other” faction “colleagues. Just sit and have lunch together, we will immediately be called into the conference room to question . “

“I have to both do and report all activities to the manager. Even go to the toilet because we are controlled both times and time alone. It has never felt like this since graduation. primary school.”

When the hero becomes a sinner

In 2016, Wells Fargo CEO John Stumpf spent many hours testifying before Congress about the scandal that had just been uncovered, and the dark sides of the “financial mirror” were gradually exposed to the public.

An employee revealed to the press that her sales were subjected to up to 8 savings and credit accounts… per day. Not to mention in year-end sales campaigns, Wells Fargo employees are required to earn more than 20 new accounts every day. “We can barely live with this pressure, my stomach tightens every time we step into the office.”

Erik, an employee at the Wells Fargo headquarters, describes his work environment: “The constant pressure every day, day in, day out. It’s like a slaughterhouse.”

Every morning, all employees must meet with their team manager in the conference room to talk about a “solution goal”. Each loan or credit account is called a “solution”, and from morning to night, every employee is reminded by his manager: selling solutions, selling solutions …

“There have been many times I’ve seen employees collapsed under the sales pressure”, Erik said, “tears, crying, they are constantly dragged into the closed meeting room to” train “more. And those trainings are nothing but threats and pushes to increase sales.

“As a supervisor was called up this room,” another employee said, “Sitting in front of a large desk, not a window, door closed slammed and locked”. The manager then gives employees a “Reminder Minutes” and makes them sign on the spot, accompanied by a deterrent: “If you do not achieve sales, you will immediately be fired and stained. This will save forever in your career. “

This is almost a nightmare for young employees, especially when they have just witnessed the biggest financial crisis of their life.

An unnamed employee said he was so shocked that he vomited into the trash can in the meeting room. Erik thinks of his job as an abusive relationship.

Some employees even “run targets” by transferring customers’ deposits to many newly created accounts. Or “creating” furthermore open “free” accounts for the homeless.

After the incident was uncovered by the Los Angeles Times, Wells Fargo was fined a total of more than $ 185 million in 2016 for nearly 2 million “false” accounts created between 2011 and 2016.

By the end of 2016, the number of fake accounts discovered increased to nearly 3.5 million. Nearly 5,300 employees involved in the scandal were also quickly fired.

Incumbent CEO John Stumpf confiscated more than $ 41 million in personal shares, returned the 2016 bonus and did not receive a salary until approved by the court.

The above disaster once again proved the classic principle of Warren Buffet: “Employees who only know sales will sometimes be tempted by sales.”

App on APKPure App to be infected with malware

Actor Dustin Diamond appeared in court because he defended his wife

Instructions to activate the license of Windows & Office successfully 100%